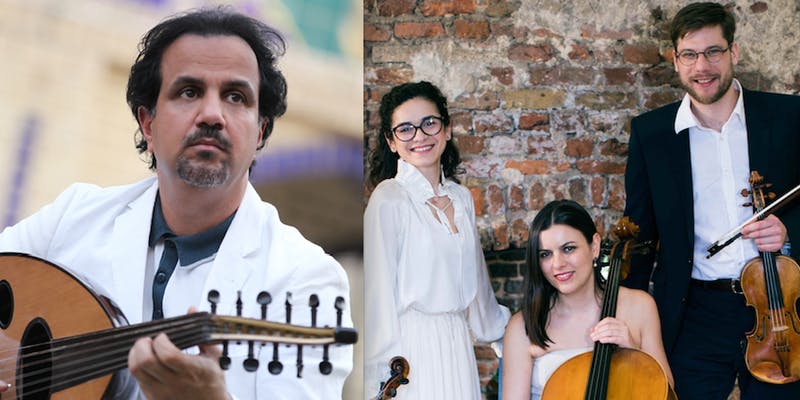 It’s Wednesday, 26thSeptember, the opening night of the London Strings Festival which runs till the 30thof the month. Audience members are shuffling into the pews at St. Margaret Pattens Church, London, settling into their seats for a greatly anticipated concert where the East and West meet.

The night began with a soothing presentation of classical pieces performed by the Veles Ensemble, a classical string trio based in London. Harmut Richter (Violin), Ralista Naydenova (viola) and Evva Mizerska (cello), opened the night with classics such as Adagio-Allegro con Brio, Scherzo – Allegro and Presto (Beethoven) and Intermezzo for String Trio (Kodály).

Once the audience was given a taste of the Western classics, Ahmed Mukhtar, Iraqi master musician and composer, took the audience on a journey to the Middle-East. He transformed the ambient atmosphere within the church with his solo performance of a variety of pieces on the oud; a fretless short-necked instrument predecessor of the lute. Mukhtar began by performing a combination of his original compositions using maqams (modes) with quarter-tones; a defining factor in Arabic music. His compositions, Bedouin Dance, Doulab Maqam Rast and Samaa’i Maqam Kurd, among other pieces were interlaced with taqasim (musical improvisation), a combination of sounds carrying a multitude of emotions that move the soul, leaving the audience entranced.

All this geared up towards the final part of the evening when Mukhtar and the Veles Ensemble teamed up to perform Mukhtar’s original work. In the Garden, Arabian Romance, and Aspania, were among the compositions arranged by Ignacio Lusardi Monteverde. As the tunes rang through the church, the Veles Ensemble and Mukhtar seamlessly laced the musical traditions of East and West bringing together what may, at first seem like two musical worlds that hardly meet while still staying true to the traditions that each of the stringed instruments represent.

The audience’s reactions were clear as they were moved to their feet at the end of the night giving the performance a standing ovation. Many admitted to attending the concert not knowing what to expect, yet eager to hear what such a combination of sounds had to offer. They left the concert pleasantly surprised, wanting to hear more. What a way to start off the first annual London Strings Festival.